We went to have a look at the Blue Nile Falls near Bahar Dar. Declining a guide we ended up with an unofficial guide anyway, plus about 20 kids following us trying to flog their wares. The falls were ok, but I believe they have been affected by a hydro electric plant, and only improve later on in the rainy season. We paid the “guide” a tip, bought a rubbish piece of cloth from one of the kids for waaaay more than it was worth due to faranji guilt and as we were leaving a couple more kids wanted pens etc. Fortunately you can appease them by giving them empty water bottles (I know – selfless, beatification and sainthood to follow shortly). Unfortunately we only had one water bottle but we did have two empty coke cans. I asked the guide if the child would find a can useful. “Yes, and can I have the other one for my child please?”.

We haven’t worked out how to deal with seeing this level of poverty first hand, and there have been strong feelings of guilt due to how lucky we have been our whole lives. We have resorted to humour to try and take the edge off, but when you moan about the fact that the document you are reading is stuck on landscape when you hold your ipad in a portrait position, a sarcastic comment from your other half doesn’t always go down well. Seeing another tourist with a child with flashy light-up soles on their shoes running around a town where people are either barefoot or wearing crappy luminous plastic sandals doesn’t help things either. I can only assume that the reason for the earlier tantrum was that the battery had died in one of his shoes. First world problems are real problems too!

From Bahar Dar we did a 170km trip to Lalibela in 7 hours. We have probably been driving a hell of a lot slower than most, but having read a horrific post from another couple who killed a little boy who ran in front of their car and seen the way toddlers are left right next to the side of the road to run around unattended, as well as the total lack of looking before crossing by everybody else we are absolutely paranoid about hitting somebody. It is exhausting driving so slowly, constantly being on the lookout and waving and smiling.

The site of a faranji in a car can raise the sort of bloodlust you would expect in a medieval battle, and some of the kids get so worked up it is similar to when you over-excite a puppy and it wees on the floor. One kid took advantage of his goats being in our way, screaming and jumping and acting as if Father Christmas had gone into his local pub leaving his sleigh parked inside the grounds of a young offenders institution with his bag of presents on the back seat. Thank God for central locking!

Lalibela was spectacular. We arranged for a guide through the hotel we stayed at (Tukel Village – camping in their garden was expensive at 300 Birr a night, but they had clean loos you can actually sit on and hot showers with good water pressure). We organised a guide throught he hotel as we didn’t want the hassle of sorting out the proper guides from the chancers, and were keen to learn a bit about the churches. At 400 Birr he wasn’t cheap, but he spoke good English and was extremely knowledgable, although he kept dropping not so subtle hints about the various things his clients had given him – brand new pair of hiking boots in the post, new torch, and a free trip to Belgium in September if the Belgian embassy decides that he will actually return to Ethiopia. We also splashed out and got ourselves a “Shoe Man” out of faranji guilt and fear of having our shoes stolen from outside the church as you have to take your shoes off each time you enter a church. When you take them off he puts them together neatly, and then hands them back to you when you come back out. Our guy was quite skilled and only dropped Jules’ shoe lace into a puddle once. When giving him his tip at the end we thought we were being quite generous by giving 3 times more than what we had been told the average daily wage for a labourer with his own spade is, but doubled it when our guide told us the lucky guy only gets this great opportunity for 3 months a year because there is a rota.

The tour of the churches was like being Whatshisname, every woman’s dream action hero symbologist in a Dan Brown novel – is that even a real job? Everything symbolises something – 3 windows for the Holy Trinity, 10 pillars for the 10 commandments, something else for Noah’s ark, etc etc. We also got to see the chanting rooms (mentioned in the previous blog post – turns out Somebody Else’s Child’s Awful Picture of a Fire engine is another person’s Monet because we overheard another tourist asking where she could buy a CD of the chanting). Even the drum they use to keep us awake at night is loaded with symbols – 2 sides to represent the Old and New Testaments, and the hide used to tie the drums represents the lashes Jesus got. Interesting factoid – did you know one of the wise men was from Ethiopia?

The really incredible thing is that the churches are all still in use. We had our tour on a Sunday and there were still people milling around all day even though mass starts at 5 in the morning. This goes on for 2.5 hours and you have to stand the whole way through. To help you out you can get a prayer rod – a long pole with a small bar on top that you can lean on like a crutch.

After the service the priests stay inside the churches to heal people with the Lalibela crosses – big intricate crosses that are rubbed on the bodies of the faithful. Occasionally you hear a loud scream when it is rubbed on a person who wants to be healed. There is also a fertility pool – a deep pool of water next to one of the churches where ladies who are infertile are lowered in on Christmas Day (7 January in Rest of World Calendar). Based on the amount of green stuff growing in the water, there could be some truth in this. 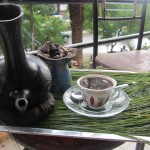 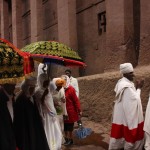 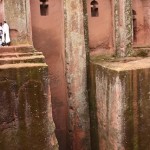 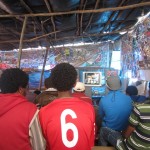 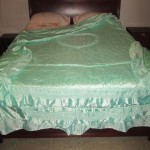 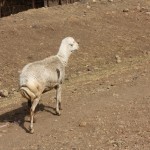 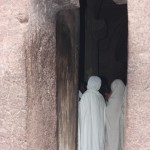 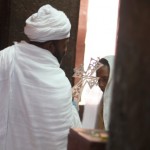 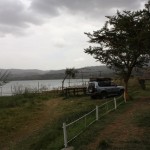 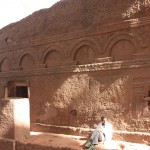 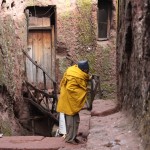 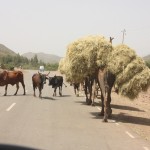 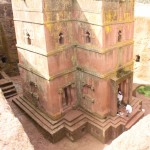 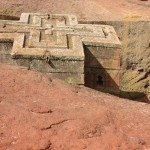 
When we organised our guide we had already planned an early start and therefore finish and I think he was quite greatful for that. Other guides weren’t so lucky or happy, because Ethiopia was playing the most important game of their lives in the afternoon. Against Bafana Bafana. A match that could see Ethiopia qualify for the World Cup for the first time ever. We had been invited to watch it in town by the guy at the hotel reception in what turned out to be a venue made from bluegum poles, black plastic bags, flour sacks and posters of various football clubs with a 26 inch tv for about 150 people. True to African form, they had music playing until kickoff and then realised they hadn’t tuned the tv for the match. I almost predicted a riot.

Followed by an own-goal from Bafana Bafana?
Seriously?

Leaving Lalibela we drove to Addis Abbaba via Lake Hayk, initially driving on proper 4×4 road (woohoo), then more 4×4 road (enough now), and then pristine tarmac up steep mountain passes with amazing views of countryside hundreds of metres below stretching into the distance. In Addis we stayed at Wim’s Holland House, meeting up with Ray and Wendy again, three English guys who are travelling on motor bikes, and a guy called Charlie who has been travelling through Asia for the past 3 years and is now on his way down Africa all on a bicycle he picked up for about £100. Really nice people, except “When We” want to tell a “When We” story Charlie almost certainly has a “When I” story to beat it without even trying. That is an adventure. We are effectively sampling the beers of Africa.

We’ve got another week or so in Ethiopia and are then driving in convoy with two other cars and the bikers into Kenya along the east side of Lake Turkana. This will be the most remote part of the journey and should take about a week before we are in what resembles civilisation again.

5 thoughts on “Lalibela to Addis”