Leaving the thriving metropolis of Addis Ababa, we went on our way to meet up with the other members of our posse for the trip into the Wild West that is Turkana, a land where cows owned by people of one tribe are rustled by members of another tribe, often resulting in bloodshed. When I have my hair rustled it affects my cow’s lick, but that is all.

We spent a night at Lake Langano, getting one wheel about a foot into the air along the way as we navigated some proper 4×4 terrain. Although the highly skilled driver did eventually get a high five from the chief navigator / camera person, said camera person did not film or photograph the momentous occasion as she was too busy apologising to the car for the unnecessary abuse as there was another perfectly good route to the lake about 4kms away. Glass coke bottles are an extremely important commodity in Ethiopia, and before we had packed up to leave, we had a coke bottle nazi from the camp’s restaurant forcing us to decant the cold, unopened cokes we had bought the night before for the journey the next day into a plastic water bottle in order for them to be flat and revolting by the time we wanted to drink them (I know, flat Coke is a First World Problem and people around the world are deeply affected by this).

We drove to Arba Minch, staying in a campsite with a beautiful view over two lakes far below us and resident warthog. We also got to meet the Ethiopian soccer team, as they were staying at the same venue for a friendly game against the local side. I donned my In-Dire-Need-Of-A-Wash-Bafana-Bafana T-shirt for a photo with them, which very nearly didn’t happen when Jules tried to get them to say “Bafana Bafana” instead of “Cheese”, and then very nearly lost my top when their coach came back later for a pic with us and the beast, thinking I wanted to give him my top in exchange for one from him when I am “next in Addis”.

The next stop was a town called Konso, where we met up with the 3 bikers, Ray and Wendy. We had the pleasure of having to travel to the local Department of Trade and Industry to get permission to purchase diesel. This involved trying to find the correct office, then some sums to work out how much diesel I thought I would need because “I would like to fill up with diesel” is not the correct answer, then off to another office to get a stamp to make it all official. We have worked out that if you want anything in Africa, all you need is a knife, a potato and some ink. Unfortunately I forgot to make a “Please don’t bullshit faranji’s” stamp so we had to pay an extra 2 Birr per litre for the “generator for the fuel pump”.

The bikers had already spent a night at a hotel in Konso, paying more for the room than a married couple would pay to dissuade homosexuals from staying there, and as they didn’t want people to think they were rich homosexuals we went to find somewhere else to stay. Fortunately we made a plan with an old guy who looks after the Konso museum on top of a hill with an amazing view and no children asking for pens or money. For this privilege all he wanted was for us to buy a ticket each to have a look at the museum. This was really interesting, with information about the tribes in the area including statues with giant penises on their foreheads to remember their heroes and other statues with penises chopped off to show the enemies the heroes have killed. The way they live is reminiscent of the blue guys in Avatar, with “Generation Trees” and other beliefs very foreign to our Western upbringing. With the tour of the museum over we set up camp and he offered us a sip of some beer he had been drinking that his wife had made. I don’t think Guinness’s Chief Brewer needs to start looking for a new job just yet.

Charlie (The cyclist we met in Addis) had joined us before heading on his way through Turkana (Us: 4×4, Fridge, Water, Spare Tyres, Hi-Lift Jack, Recovery Gear, Hi-Vis Jacket, Battery Operated Mosquito Killing Tennis Racket, In Convoy with 2 other cars and 3 motor bikes etc. Charlie: Bicycle, Spare Tube, Bicycle Pump, Puncture Repair Kit, on his own).

The museum guard had a quick ride on Charlie’s bike and nearly came a cropper when he fell, AK-47 pointing in all the wrong places, hitting the ground hard, but fortunately not going off. 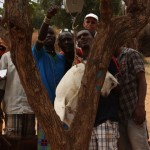 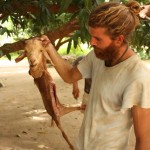 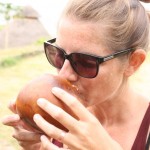 Local Beer out of a Giant Seed 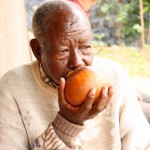 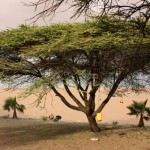 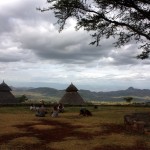 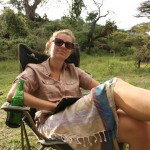 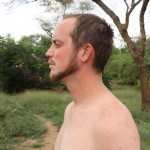 Is It an AWB Beard 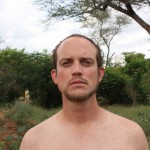 No Its a Monkey Tail 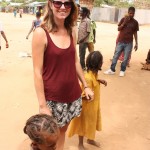 Jules and Her Best Friends

Jules and Another Best Friend 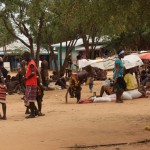 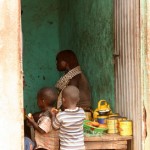 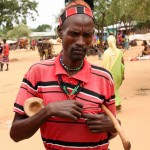 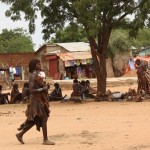 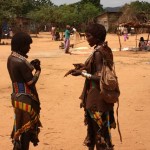 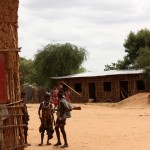 Guns in the Village 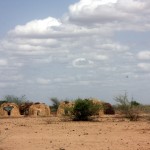 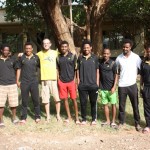 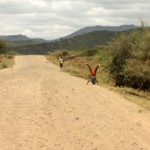 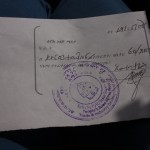 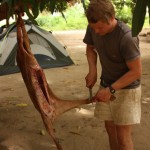 
The next morning we slipped the old man a few Birr each, something he clearly wasn’t expecting and the poor guy got tears in his eyes. Leaving the town we were treated to village children dancing on the side of the road and then running up the car wanting money as we went past. Each village seemed to have its own dance, the ultimate being a whole bunch of kids doing headstands. The villages started to thin out and people and livestock started to disappear and for the first time in Ethiopia we could stop for a wee on the side of the road without having to worry about “Give me Pen”.

Even though the road was mostly in good condition and we had a bunch of people we knew travelling on the same road as us, the stretch from Konso to Turmi has got to be the most “In the Middle Of Knowhere” Jules and I have felt this trip. We had all gone our separate ways to meet up later, and saw no cars and almost no people as we entered a beautiful valley with hills in the distance. The people we did see looked like they were straight out of National Geographic – western clothing had all but disappeared, and we saw tall men covered in scars from having designs branded all over their torsos, outlandish hairstyles and generally carrying AK-47s. The ladies were topless, a lot of them wearing animal skin skirts with red mud in their hair. Gradually the guns disappeared and were replaced by sticks and funny little chairs with a dual purpose – seat and pillow to prevent hair style from being messed up.

In Turmi we stayed at Mango Camp, a campsite next to a river bed with loads of trees covered in fruit for us to pick. It was market day in the town, so we went to see if we could get any more supplies for the next leg of the trip and have a look at the people. For some reason there are always a few people who think faranjis are too stupid to be able to shop for themselves and hang around pointing out where the shops are and what you can buy in them and then asking for commission afterwards. Without trying to sound condescending, there is quite a good chance that I have been into more shops than you, not even mentioning online shops like Amazon and eBay, which incidentally would blow your mind, and generally the only thing that has ever prevented me from successfully buying something is my wife pulling up the handbrake. I know what 2 minute noodles are. I know what rice is. Bugger off.

We all chipped in and bought a goat for supper, which one of the Archie’s slaughtered and butchered back at the campsite (9 people travelling together in the middle of nowhere – 3 Chris’s and 2 Archie’s).

The local people in the area are from the Hamer tribe, where boys become men by jumping over cattle and women are whipped and left with scars on their backs for life. Wife beating is also apparently an acceptable social norm.

From Turmi the next stop was Omorate to get passports and carnets stamped before entering Kenya.

4 thoughts on “Addis To Omorate”