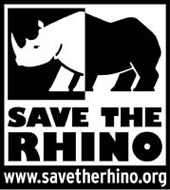 In danger
Rhino poaching is at a 16-year high. As of 1st October 2011, nearly 300 rhinos have been poached in South Africa alone. This is nearly one per day. At the beginning of the 20th century there were 500,000 rhinos; at the beginning of the 21st century there are fewer than 25,000. Three of the five species are classified as Critically Endangered and all are threatened by poaching and habitat loss.  Click here to donate to Save the Rhino. 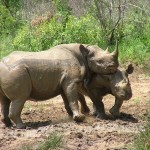 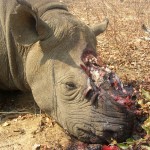 It’s not too late
One hundred years ago there were only 50-200 white rhino. Concerned conservationists brought them back from the brink of extinction and now we must do the same for the other four species. We need your help, and we need it now.

Save the Rhino International – Connecting communities and conservation
In Africa, Save the Rhino*:
· helps to protect high-biodiversity land in some of the continent’s poorest nations
· directly supports the conservation of approx. 57% of the remaining black rhino and 14% white rhino populations
· helps to provide employment for over 250 local field staff
· provides funding to reach 335,000 local people through community development and environmental education initiatives

Wherever we work, our aims are:
· To increase the number of rhinos in genetically viable populations in the wild
· To enhance the integrity of ecosystems
· To ensure that local communities benefit from conservation activities