Having lived in the UK for the past 7 years we’ve decided it’s almost time to head back to South Africa, back to family and old friends and the next chapter in our lives. To my surprise Jules didn’t need much convincing when I told her I wanted to drive home and while she spent most evenings diligently planning our wedding I neglected my duties and spent my evenings researching 4x4s, roof top tents and generally being useless in all things “wedding”.

We’ll take about 8 months travelling from London to Johannesburg.  After that I go back to the excitement of staring at a computer screen turning coffee into computer code and Jules goes back to running people’s lives. We’ll be documenting the trip and build-up to it on this site, so come back regularly if this sort of thing interests you. 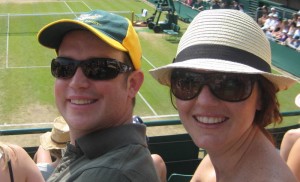 Jules and I both grew up in Johannesburg and moved to the UK together in 2005 for a 2 year stint of working and travelling. 8 years later almost to the day and it is now finally home time.

Jules has worked as a Personal Assistant to various directors at Coke for the past 5 years, making some really good friends in this time.  I’ve held various software development and analyst type jobs, and have also been fortunate to have worked with some great people (although there have been a few not so great ones as well – an example – “we unfortunately have to let some of you go but on the positive side our pipeline has never looked so good”).

I’m not sure what initially made us think about driving home – most probably the day-dreaming that goes hand-in-hand with a particularly fulfilling day at the office where you do something remarkable that changes the very fabric of society and puts you in the running for a Nobel Peace prize.

I am at an age where a battle is being waged between greyness and baldness and Jules has a biological clock. The advantage of this is that rather than being on a gap year / gap yah we can call it a sabbatical – far more civilised and although we know what we want to do with our lives hopefully we come out of this trip knowing what we want to do with the bits in-between where we have to earn a salary.

We both share a love of the bush, with an annual pilgrimage to a game reserve whenever we go back to South Africa.  Other interests include diving, photography, good food, good friends and cold beer.

The Venn diagram of music in our relationship is a constant source of consternation – in an ideal world my soundtrack would alternate between the Red Hot Chili Peppers and Guns ‘n Roses. Anything post 2000 doesn’t qualify as music. Jules is generally happy with anything that isn’t Iron Maiden. One artist we both definitely agree on is Johnny Clegg, a South African musician, and when you’re homesick in London there’s nothing like a bit of Jaluka. Because of this Osiyeza had to be the name for our site.