Having experienced a sinking Sunday blues feeling nearly every Sunday afternoon for the past 8 years, I think I’ve finally found the cure – not knowing what day of the week it is.  Jules keeps trying to teach them to me in French, but having only done a year of it when she was 12, I don’t think the dumb pupil is entirely to blame!  My current conversation with a French person loosely translates to “Good Day, do you know how to speak Milk?”, to which the response is “a leetil”, followed by a complicated game of charades.  Fortunately my vocabulary is growing rapidly with useful words like Pulez, Tierez, Overt and Ferme being added daily, although as with doors in England when it says “Pulez”, I tierez and when it says “Tierez” I pulez.

Jules has also kindly but naively added my folder of ACDC to her Ipod so there would be music for both of us.  This folder contains every one of their albums, which means that when the Ipod is on shuffle there is now a 20% chance of ACDC popping up.  Obviously she is very happy with this. 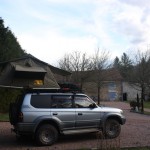 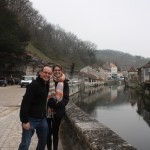 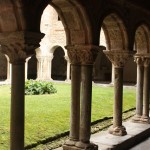 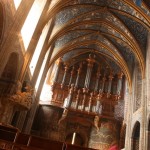 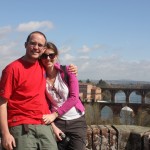 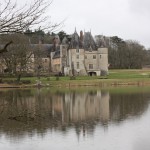 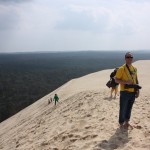 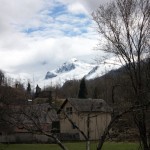 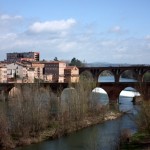 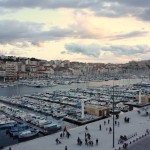 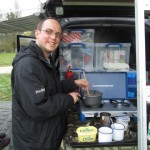 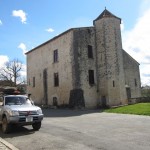 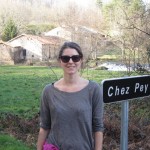 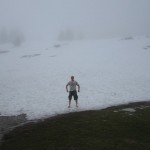 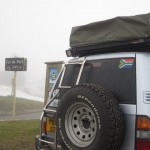 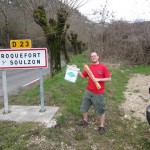 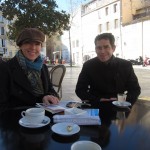 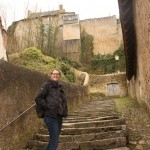 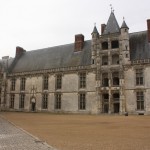 
We arrived in Dieppe from Newhaven at about 3:30 in the morning, the perfect time to learn how to drive on the right as there was virtually no traffic.

Although we both really enjoyed seeing Paris in the past we felt that 7 euros for a half pint of beer wouldn’t be a good opening gambit for this trip.  Generally when I get charged this sort of price for a drink I ensure it includes a free beer glass, but we don’t have enough space so we skipped Paris and headed straight to the countryside.

We’ve been driving predominantly on country roads to skip the tolls and fallen in love with what we’ve seen – quaint villages and farms separated by miles of fields, forests or vineyards, with the odd Chateau thrown in to keep things interesting.

As beautiful as the scenery is, March is definitely not the right time to go, as the trees are still short of blossoms and leaves, and pretty much everything is closed.

The various Chateaus we have been to have all been incredible.  I really wish I knew more about French history than guillotines and “your mother was a hamster and your father smelt of elderberries” – if you don’t know where that is from, you probably aren’t going to enjoy this site, because Monty Python is where half my general knowledge comes from.  The rest is a combination of Tintin, Asterix and Carry On movies.

Driving has been relatively easy, although our old address might suddenly receive a legion of fines in the post – somebody else’s problem?

There are huge differences in fuel prices, with diesel anywhere between 1.32 and 1.52 per litre.  Generally petrol stations attached to supermarkets are less.  Most of the campsites are closed at the moment, so we’ve had to do a bit of googling to find anything that is open.  2 campsites have really stood out so far.   http://www.manzac-ferme.com was one, where we were welcomed by George and Margaret like long-lost friends.  The other one is http://www.lemontagnou.co.uk, a lovely campsite in the Midi Pyrenees, with views of snow-capped mountains, a crystal-clear river with trout fishing, run by a lovely family, who went out of their way to help us, even though we had to resort to Google Translate to understand each other.   Catching a trout here must be wonderful, but not catching one is a close second.

Other campsites we have been to have been near big cities – Bordeaux and Dax (long story short, we buggered up Bordeaux, entering something into the Garmin and next thing we were near Spain.  Whoops!!!  At least we got to climb the largest sand dune in Europe along the way instead of moving from one Chateau to the next listening to crazy people talk about wine).  These campsites have communal bathrooms.  You may think communal bathroom means young French and Swedish ladies playfully flicking each other with towels then giggling while they chase each other around the room.  What it really means is old person in dressing-gown gurning because her false teeth are next to her bed in her motor home.

We’re currently staying with my cousin and his family in Provence for Easter, where we have been spoiled to the point of wanting to cancel the rest of our trip and move in with them.  It’s been really good getting to know them properly and meet their 2 boys Oliver and Tristan, having last seen them about 15 years ago.  The trip to Marseilles will remain a highlight of the trip – thank you, thank you, thank you!!!

Without trying to place a commentator’s curse on our car, it has been running well.  There have been a few issues – the lever to lock the central differential became jammed after a short stint in sand.  Fortunately this was relatively easy to fix with the help of Anthony (good guy to know if you’re in Provence).  Our inverter popped a fuse the second time we used it and now makes a continuous beeping noise when we turn it on, which is a bit frustrating.  Hopefully I can get it working as it would be nice to remain self-sufficient when charging laptops etc.

Apologies for the late update – we’ve been really disorganised and when we have had the internet, we’ve had to use it for planning the following day.  I promise they will be more frequent – even if it’s just a note to say we’re ok.