The night before the ferry we went to KFC to minimise the risks of spending any more time in the ferry loos than was absolutely necessary. We arrived at the port to chaos – hundreds of people pushing and shoving as they tried to get through customs with massive bags and boxes full of things they had bought in Egypt to sell in Sudan. With a limited number of seats on the ferry – about 150 more than officially allowed, there were quite a few people who had arrived hoping to get a ticket at the last minute only to be turned away at the gate. Some people were not happy. We were ushered through quickly, skipping the queues and mayhem due to a large number of greased palms compliments of our fixer and the not insignificant amount of money we had given him.

The ferry filled up until we couldn’t see any more of the deck – even the lifeboats were full of people. We had the luxury of our little piece of deck in the sun, with a small amount of shade as we sat on boxes with life jackets – I imagine 1 or 2 less than there were people on board. Raymond and Wendy joined us, a Dutch couple who are doing roughly the same route in a Land Rover, and Dave and June, another couple who are backpacking down to South Africa. Jules will never be the same again having had to go to the loo. Without trying to invoke a commentator’s curse, I think worse ones will be hard to find. We were on the ferry at about 11 in the morning and arrived the next day at about 2, smelling and looking like we had just stepped out of a salon, so about 3 Egyptian Hours.

In Wadi Halfa we met our fixer Magdi, filled in all sorts of forms and got into my kind of taxi – a Land Rover that is older than me, and quite possibly my old man. There is definitely some truth to the saying that a Land Rover is always sick, but never dead (no longer talking about my old man). We were given some not so pleasant news that the barge had engine trouble and had to go back to Aswan (been here before Mary?) and then we went to our hotel to learn about relativity. We stayed at Cangan Hotel, with A/C (air cooling, not air conditioning) and an ensuite bathroom at 80 Sudanese Pounds per night. The loo is a hole in the floor with things of unspeakable horror inside. It could have been better. Scary thought – it could have been worse. Cangan Hotel is the Hilton of Wadi Halfa. Relativity! Congratulations Nanford Guest House of Oxford – it has taken 6 countries to knock you off top spot of worse place to sleep, but not by much!

We met 3 guys who are travelling from South Africa to Dublin on Scooters (http://scooteraddicts.co.za). Great stories, it’s just a pity we couldn’t share them over a beer.

While waiting to get the cars off the barge the customs official found out we are South African and then proceeded to recite “Long Walk to Freedom” from memory. It turns out that he had been translating it into Arabic for his diploma, but after starting it he kept saying “Tomorrow I will translate 5 more pages”. We asked why he had chosen such a large book to translate and he said that the book had been split into 4 sections and 2 people got their Master’s degrees and 2 people kept saying “Tomorrow…”.

With the cars back after 4 long nights we left Wadi Halfa with Ray and Wendy and headed out into the desert where we wild camped along the Nile near a village with mud huts. While we were setting up 2 ladies arrived from nearby with a bowl of dates for us, and then they wanted us to stay at their house. We visited them the next morning and they made us coffee while we all tried to understand each other. 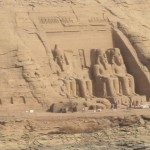 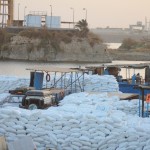 Beast on Barge with Fertilizer 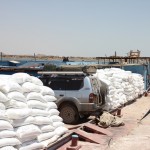 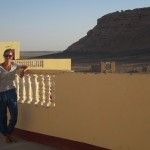 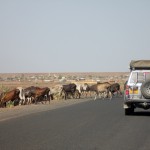 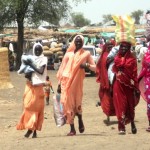 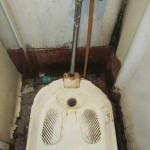 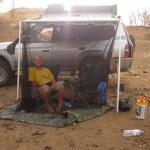 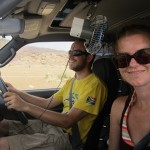 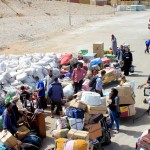 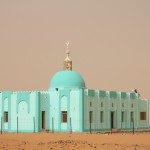 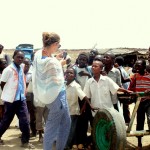 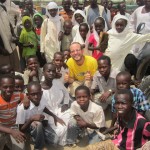 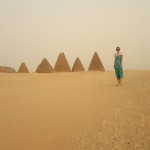 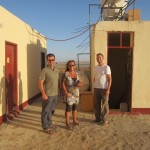 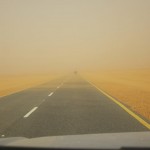 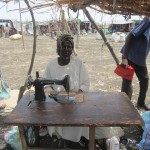 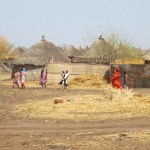 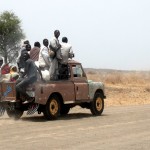 
We tried wild camping the next night as well, but a couple of policemen arrived and made us follow them to the police station nearby to camp. A night with temperatures in the 40’s, dogs barking and howling constantly, people talking, blaring TVs and mosquitos, followed by a 4am call to prayer meant that tempers were pretty short the next morning and Jules and I started the day with a pact that anything we said to each other that day could not be brought up in a future argument. We drove past some pyramids and got a few pics, but with the temperature reaching 50 degrees, all of us exhausted and gatvol from the sleepless night we skipped the 100km round trip to the Meroe pyramids and headed to Khartoum.

In the desert we experienced a dust storm. This stripped the paint off Ray and Wendy’s roll bars on their Land Rover, filled our air filters with sand, and ripped bits of metal out of the condenser for our aircon.

If you are in the market for a fridge, I can highly recommend an Engel. In the heat of the desert (did I mention 50 degree temperatures?) we turned the fridge to 11 and at times even had ice in our water.

Khartoum comes with a “Beware of Kidnapping” travel warning from the British Foreign and Commonwealth Office. We had quite a few kidnapping attempts to invite us round for tea. Khartoum also has a Steers, and after eating Foul, Potato and Goat Stew and other tasty treats, we both needed a burger badly. We stayed in a “campsite” called National Camping Residence, which looks like an old army barracks with an area to park next to a stage for holding rallies. After Wadi Halfa the toilets were ok, but still not brilliant, although I believe infinitely better than the infamous Blue Nile Sailing Club a bit further on. There was also a large Minaret that appears to be used by people training to be Immams – more frequent than other mosques, louder, less like Meat Loaf and more like Bob Dylan.

We tried going to the Dinder National Park, but when we arrived at the entrance we were told we had to go back to Gedaref first for permission, about 150km back from where we had come, so we decided to skip it and spend another night wild camping before crossing the border into Ethiopia the next day.

On the way back from the park gates we went through a little town with a market and stocked up on fruit and vegetables. Meat was available, but we aren’t that brave yet. It involved flies and legs of beef with skin on and hooves. As we walked through the market we were followed by a swarm of children like 4 Pied Pipers. Before getting back into the cars we had a photo shoot with everybody and then headed off to camp.

Sudanese people are every bit as friendly and hospitable as people who have been there say they are, and it is nowhere near as dangerous as people who haven’t been there say it is. In Egypt your fixer gets you a fan for the car (because if you buy it yourself they will charge you more. I will get you a good price. I will then blatantly pocket a portion of the cash you have given me for myself and then go on about what a good deal I got for you). In Sudan you ask somebody if he knows where you can get a sticker for your car and he sends somebody to get one for you and refuses to take your money because it is a gift. On the ferry we met a guy called Abdalla, who told us that wherever you are in Sudan, no matter how rich or poor the person, if you arrive at their house they will invite you in for tea, food and a place to stay. In Wadi Halfa we met a guy called Tarig who sat down with us for dinner and then disappeared half way through to pay for all of us. In Khartoum we were invited to tea on the side of the road by an old man, Mohamed, who was visiting a friend in hospital. He tried to pay the tea lady for our drinks and she refused to accept his money because we were her guests too.

If our fragile little white bodies could have handled the heat a bit better we would have stayed longer, but unfortunately Sudan was just too hot, so we rushed through it. If only the rest of the world could be a bit more like the Sudanese.