When we were in Monaco the beast went on some of the Monaco Grand Prix Circuit, including inside the tunnel. There is no new lap record. There are a few angry Ferrari drivers who were stuck behind us and were unable to get out of second gear and impress the ladies on the yachts as they went passed the Marina.

Speaking of the Marina – there are some pretty big yachts in Monaco. It must be a bit upsetting to feel like you’ve finally arrived only to discover that the guy moored next to your yacht has one with a with a helicopter and several jet skis. The second most impressive boat didn’t have another one right next to it, so we could have taken a pic of more than just the back of a yacht. It also happened to have a pompous English twit walking up and down the deck on his phone speaking loud enough so that we could hear him telling Alfi that he would call him back as soon as he had finished closing his latest deal. Who would give somebody like that the satisfaction – rather let him think his yacht was beneath our contempt. Unfortunately this backfired when it turned out the Bentley I was admiring nearby had the name of his yacht on the parking slip. At least we can all go to sleep comfortable with the knowledge that he has a small willy.

After Monaco it was on to Italy. It was a bit of a shock to the system going from tractors in France to crazy Fiats. In Genova we drove along some sort of Mobius strip for ages, always in the wrong lane, and always unable to get into the right lane because of some guy on a scooter. Unfortunately driving the beast on Italian roads is like getting a left-handed person to write calligraphy with a fountain pen – loads of elegant turns, but ultimately you’re left with smudged ink on your hands and a smear on the page. If you want to drive properly in Italy you’re going to want a red car with logo containing a horse. At least they give you the option of driving straight through the mountains rather than around them, although for this luxury you pay hefty tolls. I didn’t think it was possible to have so many tunnels and bridges.

Fuel in Italy is pretty expensive compared to France – we’re lucky if we can find anything for less than 1.65 per litre – the minute you’re away from a big town you’re suddenly looking at 1.75 and up. The really amazing thing is the sheer number of petrol stations right next to each other all with different fuel prices. You can also get charged 2 different prices at the same station depending on whether you fill up yourself or get a petrol attendant to do it for you.

Camping is also more expensive than France, generally around 20 euros a night for a rubbish campsite. In Florence you’re looking at around 36 euros a night.

We spent two nights at a campsite about 5 metres directly above the sea. From here we caught the train to Cinque Terra as cars aren’t allowed in the villages. You can’t go there without wanting to paint – photographs almost seem like an insult to the place. 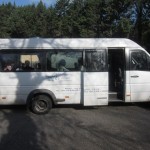 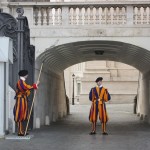 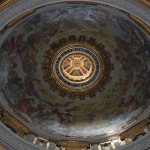 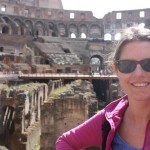 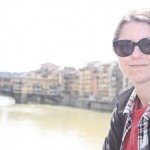 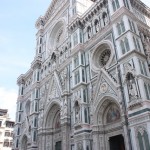 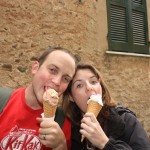 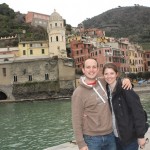 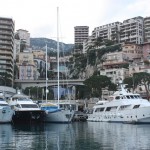 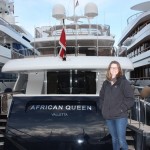 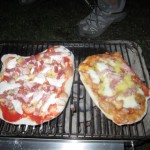 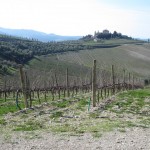 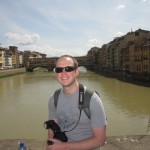 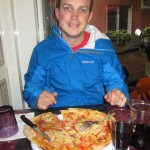 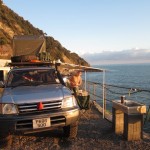 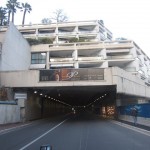 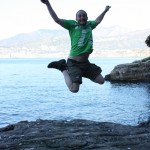 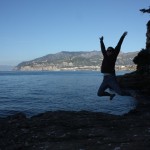 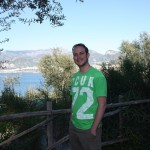 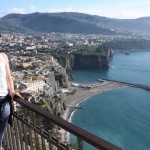 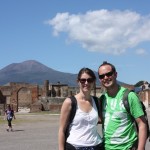 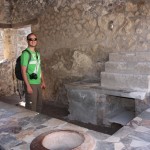 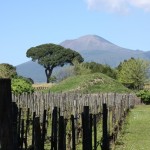 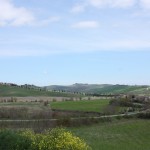 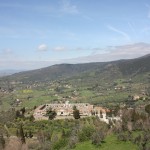 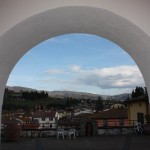 Classic frame within a frame photo with plastic garden chairs 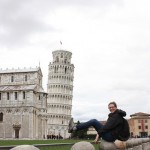 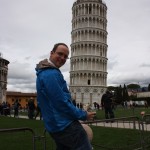 Hanging a bit to the left 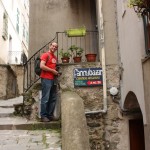 Jules is so juvenile 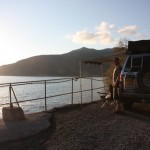 
From there we headed off to Pisa and Florence to see what all the fuss is about. Florence is beautiful, but I couldn’t help feeling a bit flat when we left – like Venice it has become too successful as a tourist destination and is completely overrun with them (/us) and the touts and restaurants trying to fleece them (/us). With so little time in Italy, I was also disappointed not to be able to see David and go into the cathedral because of the incredibly long queues. Florence can’t be seen properly in just a day.

Driving through the rest of Tuscany has been spectacular. Every picture we’ve ever seen of the area is exactly what we saw – vineyards, green rolling hills, villas with long driveways surrounded by trees.
In the south of Tuscany we managed to find a campsite run by a lovely elderly couple. While I was preparing supper Jules went to go and pay and disappeared for ages. I went to go and find her only to discover her stuck between them watching the new pope conduct a service on tv. Before I knew it she had made a quick getaway and there I was, not knowing how long was long enough before I could also bugger off without seeming rude. It was quite nice watching the two of them singing along, absolutely smitten by their new papa.

We were a bit nervous about driving in Rome, so decided to find a campsite outside and catch a train in. In the end we picked the sort of campsite that will prove to people that we are hardcore adventurers – Happy Village and Camping, with its very own shuttle bus.

Rome was incredible, although as with Florence, trying to condense everything into two days is impossible. We got to see the Coliseum, Roman Forum and some of the Vatican. We also managed to find a cappuccino for 1 euro a block away from a piazza where they were going for 6.50. Score! The beast unfortunately has a new nemesis – an Alfa Romeo – every time we want to do a u-turn there is one behind us, every time we want to overtake a truck, there is one overtaking both of us – thank goodness we’ve never had a full one behind us.

Today we went to Pompeii and are now in a campsite overlooking a bay with Mount Vesuvius on the other side. We’ve managed to find a plug for the laptop near a dinosaur and car you put money into for kids to ride. Every time we move they sense us and start flashing lights and playing the smurfs.

If I’m brave enough I might have my first swim in the sea tomorrow morning. Either that or a lie-in.