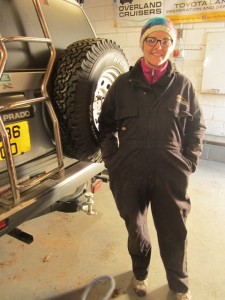 g lost our faith in the original overland expedition “specialists”, we went to see Julian at Overland Cruisers so that he could go over the car and see if there were any glaringly obvious issues that the other guys had missed. While he did this he explained each thing he was looking at and showed us some of the mechanical things to be aware of and how to fix them – basically enough knowledge for us to hurt ourselves.

Even with the OME springs, the back of the car was still a bit low and we installed some air bags which have made a big difference to the handling. Another hangover from the previous mechanic was that even though we’ve just had a massive engine rebuild because of the piston problem, the car needed about 3.5 litres of oil.  You would think they would have checked the oil levels before handing the car over.

If you have a Land Cuiser don’t make the same mistake we did – go straight to Julian at Overland Cruisers.  You can get hold of him through his website here.