To drive along the Amalfi coast you don’t need a fancy pair of brown leather driving gloves, although a fancy pair of brown driving trousers is a prerequisite. As with other coastal roads in Italy, the beast was a bit out of its depth, sharing the pool with a very nervous driver and even more nervous chief navigator. Occasionally we would pull over to the side when the rare opportunity presented itself to enjoy the breath-taking view and allow the hordes of Alfa Romeo drivers to go past. There is only so much friendly hooted greeting a man can take. We weren’t alone – at one of the viewpoints we stopped at a car with two sweet old ladies on a girls holiday had also stopped and the one lady was all apologetic for swearing when she described driving on the road as – forgive me – “hellish”.

From the Amalfi coast we headed towards Bari to catch our ferry, stopping at Alberobello along the way. This is a UNESCO world heritage site known for its Trulli’s – buildings with roofs like you’ll see in Snow White and the Seven Dwarfs. Walking through one of the roads we got sucked into a chilli shop to enjoy a “free” panoramic view from his roof – no need to buy anything. On the way out he proceeded to feed us samples of all his wares – from chilli chocolate, to chilli liqueur, to chilli jam, to the star of the show – Dynamite, packaged with its very own fuse. After Chris Way-Jones’ concentrated napalm, this was like candy-floss-flavoured-baby-food, prepared by fairies and angels, stacked full of unicorn kisses, good deeds and sweet dreams. One bottle of Dynamite richer we headed on to the ferry, passing a gaggle of prostitutes along the way – what little we saw of Bari is pretty classy!

The ferry trip was uneventful. We realised why cigarette companies used to advertise with pictures of people on yachts rather than long-haul truck drivers chuffing away in stairwells on ferries. I also spent about an hour watching a Greek father and son play backgammon. Turns out there are about 5 different variations of the game, each one with its own devious ways for a father to put his son in his place. 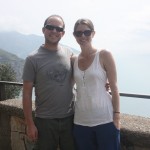 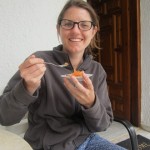 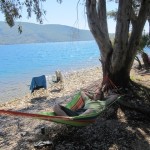 Sunday – Preparing for work the next day 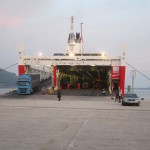 Some Poppie with Poppies 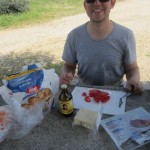 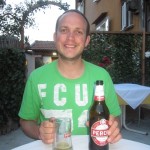 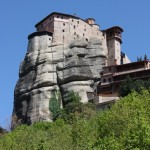 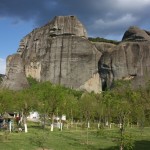 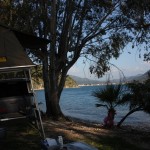 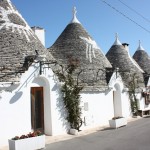 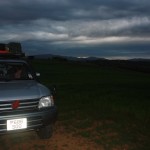 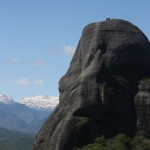 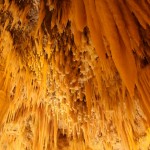 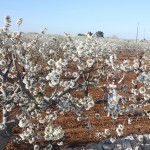 
After a night with no sleep we found a brilliant campsite right next to the beach and spent the day lounging on the hammock with a couple of Mythos – I can’t believe none of you have heard of it, it’s “the world’s most famous Hellenic beer”. The highlight of the day was when a man and his wife came past us fishing for octopus with hand-lines, chains and half-eaten chicken legs as bait – some couples go to the theatre together, I guess this is their thing. We both said we wanted to take the best bits of our trip and incorporate them into our lives – most romantic wedding anniversary ever?

Greece has been an interesting experience. As much as we would have loved to have seen Athens and Delphi, we were too far north and haven’t seen much touristy stuff. The countryside has been beautiful, from farmland to snow-capped mountains and forests. Meteora was spectacular – monasteries built on amazing sandstone formations. We experienced our first night of “wild camping” – driving down a sand road into the middle of nowhere and waiting for the sun to set before pitching our tent. It took a while for us to get to sleep – suddenly the sound of the wind blowing against the tent becomes an angry farmer with a shotgun. I guess this will take some getting used to.

For a nation that effectively gave the western world our moral compass it has been a bit distressing to see how animals are treated over here – to quote Ghandi “The greatness of a nation and its moral progress can be judged by the way in which its animals are treated”. I wanted to find out why there were so many strays and came across the following website: http://www.straysofgreece.org/ – this is effectively what we have seen throughout. Shame on you all!

Tomorrow we make our way to Turkey.

6 thoughts on “Italy to Greece”