Two posts in one day? A public holiday in Egypt with a car stuck in customs allows for these little lucky breaks. We arrived at Iskenderun on the Friday to buy our ferry tickets. These were bought through an agent for Sisa shipping, Remon Travel. Tickets weren’t cheap – $180 each and another $590 for the car. We spent a lot of time waiting to find out when the ferry was leaving – either Saturday or Sunday. Saturday was spent lying on some grass reading our books while we waited. We were told on Saturday evening to be at the agency at 9:30 the next morning. We spent 2 nights at a strange campsite (Palmera camping) on the outskirts of the town with no showers, so got to wash our bums and front bums on the beach in front of the fishermen with our own shower. On the second night we were invited to dinner with 3 Turkish friends who had gone there to do some fishing and have a barbeque. We were treated to lamb chops, steak and a delicious Turkish salad laced with chilis (we always seem to eat chilis before a long journey!). The evening was spent communicating via google translate, and they attempted to teach us some Turkish dancing. We also got to sample a Turkish version of Ouzo. With the odd exception, the Turkish have been the most hospitable, helpful and friendly people we have met in all our travels.

On the Sunday we arrived at the travel agency to find out what time the boat was leaving and were greeted by hundreds of Syrian refugees, fleeing the fighting for Egypt and Saudi Arabia, loading bags on old rusty red trucks. It reminded me of the opening chapters to the Grapes of Wrath, and Jules and I both became quite emotional seeing it all.
We spent the rest of the day in a compound with the Syrians and Turkish truck drivers, waiting for the ferry to be ready. With no understanding of Turkish and our passports disappearing to various corners of the port, sorting out papers for the car, scorching sun and dirty loos, this wasn’t a highlight of the trip.

On the ferry we couldn’t walk two metres without somebody calling us over to introduce themselves and ask us where we were from. I got to play backgammon with a couple of Turkish truck drivers for a few hours, Jules broke a personal record and read a whole book in 1 day with time to spare, and we got to meet some of the Syrian refugees, finding them to be incredibly kind and in good spirits, despite all the horrors they are currently going through. Towards the end of our journey we were shown some horrific videos on a phone by a hair dresser turned freedom fighter. They were extremely graphic, including a video of his dead brother. He was on his way to deliver them to various news agencies. Jules and I both found this extremely upsetting, and where we normally would have moaned about things like boredom on a 27 hour long ferry trip and dirty loos, I guess we both found a bit of perspective. 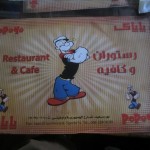 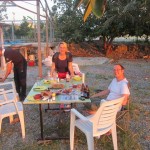 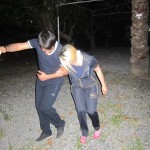 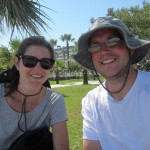 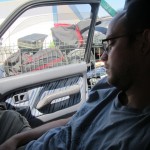 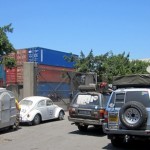 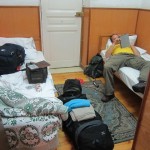 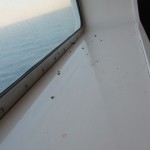 
Sleep deprived we finally arrived in Port Said at about 10:30pm and were greeted by police in riot gear in case things got out of hand. We met our fixer Eslam Elshamaa (his details are – Tel 002 0128 9220 002, email eslam_elshamaa@yahoo.com). We left the car with various other cars and trucks in a garage in the port after a search by customs and at around midnight we went by taxi through crazy streets full of hooting cars and people shopping with little children to our cheapest hotel yet (Hotel De La Post, at 95 Egyptian Pounds (about £9) a night. We were greeted by a mouse at the top of our stairs and cockroach in our basin, and plenty of mosquitos popping in to say hello throughout the night.

The next morning while waiting to be picked up to sort out the car we met two other groups of travellers, waiting for the ferry back to Turkey. http://www.jolonimp.wordpress.com have travelled from all this way from South Africa in just over 1 month in their Hillman Imp), and http://www.herbiesworldtour.com who have travelled pretty much the whole world in a 1960’s Beetle. It was great to meet you all, even if it was only for a few minutes.

We threw caution to the wind and left our hotel with our bags, naively thinking we could get our car out in a day. We spent the morning being moved from one place to the next by Eslam as he wheeled and dealed his way around the city. On our way back to the hotel he put our bags on the roofrack of a taxi and as we were about to get in the taxi it raced off into the distance with our bags, never to be seen again. Fortunately Eslam had the presence of mind to take down the licence plate and after a couple of hours in the police station we got a call to say the guy had been caught and our bags had been recovered. How they found him in a city of taxis we will never know! This has been a pretty hectic couple of days and after the morning’s escapades, we were really glad to come back to our hotel room, which suddenly seemed quite appealing!

Due to today being a public holiday, with any luck we should have the car on Thursday (Inshallah), to head out to Cairo for the next leg of visa admin (Sudanese visas) and crazy city driving.

11 thoughts on “Turkey to Egypt”