Egypt has a lot of mosquitoes. You would think the author would have warned us about this when he wrote about all the other plagues in the Old Testament. When we finally left Hotel De La Post the room looked like a murder scene with splotches of blood all over the place after four nights of gruesome attacks and counter attacks. No sign of the mouse again, but Jules managed to squash two cockroaches with her shoes. In the hospitality industry Hotel De La Post would be a “Johnny No-Stars” (a Johnny No-Stars is a guy who works at McDonalds. The stars are based on how many times his picture has been on the “Employee-of-the-Month” wall). At least it was cheap and we had hot showers.

With our bags back and the two of us now vigilant, seasoned travellers, we went through the process of getting our car out of customs. This involved walking down busy streets dodging piles of dead fish and other litter as we followed various members of Eslam our fixer’s gang of lackeys. We entered a run-down building opposite the port to get our bill-of-lading documents and receipts. We had to do this several times, going up an old lift without proper doors that had a verse from the Koran playing each time it was used. Once this was eventually done, Jules disappeared to sort out the rest of the paperwork with the fixer as the car is in her name. I was left waiting in a coffee shop and started wondering if we had been a part of some big scam and now not only had I lost the car and the money for getting it out of customs, but also my wife. Jules arrived back a bit later with Eslam and the car. He took me to one side and told me that everything had been sorted, but there was a bit of a problem in the region of 400 Egyptian Pounds that had to be paid on top of all the other cash to get the car out without it being stripped and having each item individually inspected. I responded with a “but we don’t have anything to hide”, and he followed this up with a “they would have found something and made things very difficult with us so I made the problem go away, and now because we are such good friends I am willing to pay half of this so that we can remain good friends” – or something to that effect.

While we were in Port Said we spent quite a bit of time in a restaurant called Popoyo with pictures of Popeye all over the place as it had wifi and was quite cheap. We spent some time looking for things to do in Port Said, but the best we could find was “go to Cairo”, so once we had the car back, that is exactly what we did.

The road to Cairo was in relatively good condition and although it wasn’t too busy, we still ended up with terrible squints as we tried to keep tabs on people overtaking from the left, right, driving towards us on the wrong side of the road, stopping, pulling in front of us, the odd unmarked speed bump, potholes etc etc. Then we somehow made it to level 2 and arrived in Cairo. Fortunately we didn’t have to do much town driving, as there is a ring road that goes around the outskirts of the city. The place we were looking for was about 2km from the pyramids, so we also had a relatively well-known landmark to lookout for. When we were in Egypt about 8 years ago and were driven around everywhere we got the impression that the pyramids were between Cairo and the desert, with sand dunes and desert stretching out past them into the distance. In our naivety we didn’t realise that this particular desert is only about 1 or 2km of sand and behind it is Dreamland amusement park. I hope I haven’t spoiled the illusion for anybody else reading this! 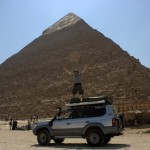 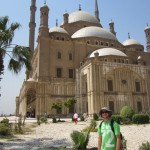 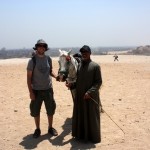 Picture for Free my Arse 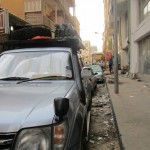 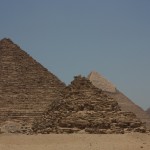 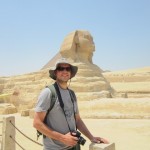 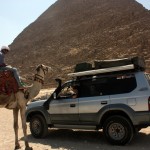 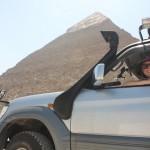 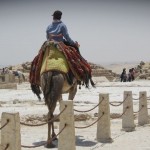 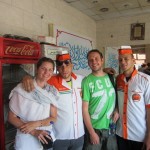 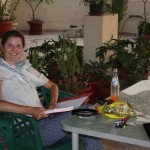 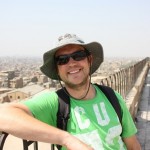 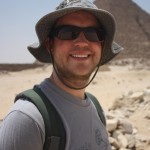 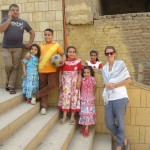 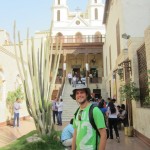 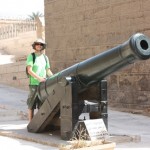 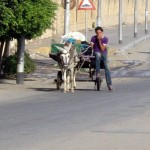 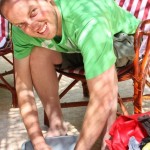 Helping Jules with her chores 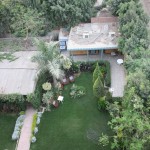 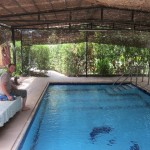 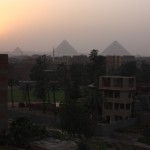 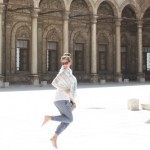 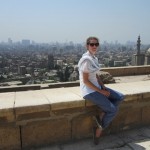 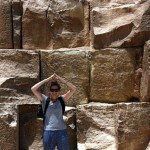 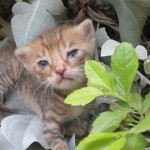 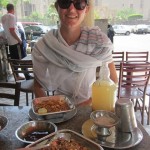 
We have been staying at a place called Ibis Garden Camp, run by a couple Sue and Halal. Effectively you get to park your car in their driveway and then get the use of their garden which includes a sparkling blue swimming pool. They live on the 6th floor which is mostly a covered patio with plants and a view of the pyramids. Getting here meant driving through roads covered in litter alongside pools of rancid green water breeding millions of super-powered mosquitos that think Tabard is a tasty garnish for your arms and legs. Although quite expensive (100 Egyptian Pounds per person per night) they have been really hospitable, and helped organise us a driver (Walid, great guy) to get to the embassies to sort out our Sudanese visas. We’ve also been blessed with target practice for our electric bug zapping tennis racket, which has become a veteran with more mosquito kills than there are numbers. As mentioned earlier, Tabard is absolutely useless over here, but we’ve been told about a spray a lot better called “Off”, which works brilliantly. I guess there wasn’t space on the spray can for the first part of the brand name.

We arrived in Cairo over a long weekend, so had to wait to sort out our visas. In this time we took the beast to get its photo taken with a pyramid, visited the Egyptian Museum, the Citadel and Coptic Cairo, as well as the pyramids and tombs at Saqqara (a must see, and only about 15km from the guest house). The Coptic part of Cairo had some incredibly old churches and we were shown around one of them for free, something that left us speechless as everywhere else you can’t fart without somebody asking for baksheesh.

“Welcome to Egypt” is the first thing you hear when you meet somebody in a touristy place over here. To the uninitiated this seemingly innocuous comment is extremely dangerous and should be handled with care. “Thank you” immediately puts you on the back foot because the “You’re Welcome” you get back means you now owe him something in return. You can’t ignore the guy because that would be rude. Effectively you’re screwed. Fortunately we’ve been here before and have become slightly wiser, so when the guy at the Saqqara Tombs shows you his keys and pretends they are the keys that will open special doors to never before seen sights, I was able to avoid him by showing him our car keys and saying “don’t worry, I have my own keys”. We loved watching other tourists with their little arsenals of tricks to try and make their way past souvenir salesman, unofficial official tour guides and camel rides, some succeeding, but most failing hopelessly and ending up with the same plastic pyramids, wooden camels and all sorts of other crap we ended up with last time we were here.

While being taken around Cairo Walid took us to get some Egyptian food for lunch, treating us to Koshery, Foul and Falafels, which were all very tasty dishes. At Saqqara I was also happy to find loads of Bee-Eaters that had made their homes in a sandy slope next to the museum.

To get the Sudanese visa you need a letter from your embassy, so off we went and while we were waiting in the queue for the South African embassy to open Jules forgot where we were and announced loudly to me in Afrikaans “Ek wil ‘n nommer twee he” (I need to have a number two). We were greeted by a friendly guy called James who gave us the quote of the trip so far – “If you think you can, then you can, but if you think you can’t, then that expectation of failure alone will lead to failure”. Fortunately we thought we could, and managed to leave with a letter on the same day. Other than having to wait a day to get our Sudanese visas this was a relatively painless, although costly procedure (745 Egyptian Pounds or $100 each).

We are currently in Luxor, having spent a couple of days in the desert. More on this soon(ish).

4 thoughts on “Port Said to Cairo”