As a student I had a Mini 1275 with a 34 litre fuel tank. Filling up a 90 litre gas guzzling 4×4 along with several 20 litre Jerry cans in Egypt 15 years later is considerably cheaper. In Cairo we paid 1.1 Egyptian Pounds per litre. I’ll let you do your own currency conversions and calculations, but if you’re too lazy it is cheaper than bottled water.

Initially we were trying to decide whether to scuba dive in the Red Sea or head out into the White Desert instead. In the end we have decided to do both. After hours of driving with desert around us we arrived in a town called Bawiti, looking for fuel to save me having to resort to one of two equally unappealing tasks – syphoning fuel from our jerry cans on the roof and getting a mouthful of diesel, or climbing onto the roofrack, unlocking the jerrys, lowering them down, climbing off the roofrack…

Unfortunately the famous Egyptian diesel shortage is a reality and we couldn’t find any. Somebody approached me and offered me a 20 litre jerry for 80 pounds, still cheap, but having got a taste of really cheap diesel after Europe, we held out. In Bawiti the beast was among family, with masses of Land Cruisers, young and mostly old driving around.
From there we headed into the Black and then White deserts, blown away by the sheer beauty of them both. I was like a kid at Christmas, desperate to go off-road for the first time since our 4×4 driving course, only to have my hopes dashed when the diff lock jammed in high range again. Because of this and the fact that we were on our own in the middle of nowhere we did some risk management and I behaved, staying away from where the big boys play. I still managed to get stuck once, but letting the tyres down solved the problem and we went to find a place to wild camp. The White Desert has got to be one of the most spectacular places we have ever been to, and that night we were treated to one of the best night skies I have ever seen, lucky enough to have a new moon. If only we hadn’t been such fools and had brought along some beer or even a Coke. Idiots!!! While we were preparing supper a guy came past us with about 4 camels, gave us a wave and carried on into the desert as the sun was setting.

When justifying the expense of shoes, my philosophy has always been to work out how much it costs each time I’ve worn them. If a pair costs £60 then the first time you wear them has cost you £60 and you are an idiot. The next time you put them on you are immediately down to £30 per use and things are looking up. On our way to Farafra the next morning we came across a guy who had broken down in the desert. Currently the cost of using our booster cables makes us idiots, but next time it will be halved! In Farafra we managed to find diesel and then spent the rest of the day going from one oasis town to the next, being greeted by friendly waves and hoots wherever we went. Careful not to make the same mistake as the day before I went into a shop to buy some cokes (5 Egyptian Pounds for a 330ml can or 5 Egyptian Pounds for a 1 litre bottle). Fortunately only 1 of the 4 bottles I bought was Sira Cola, made in Egypt, with almost identical logos and branding, a similar initial taste followed by an aftertaste of cough medicine and bile.

In hindsight having a section in our blog about brain farts was a bit foolish as it implies there will be more. Arriving at a village in one of the oases to see an ancient Roman tomb I had a brain fart. Needless to say we didn’t get to see the tomb. It was probably rubbish anyway. More about this to follow. 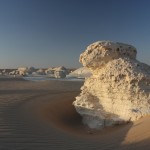 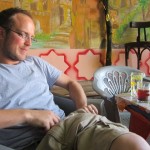 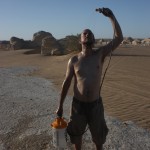 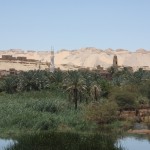 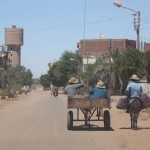 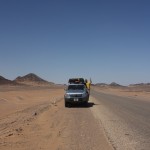 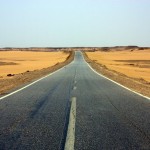 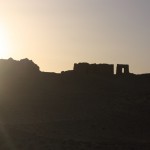 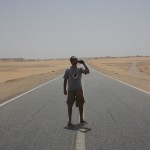 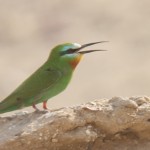 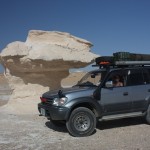 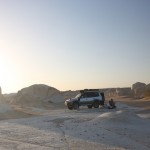 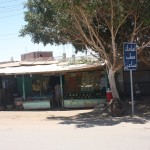 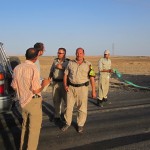 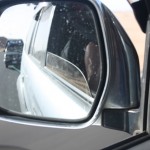 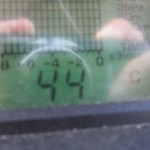 
From there we drove to a town called Al-Kharga to find a place to camp for the night. Along the way we got 1 use closer to justifying the expense of our snatch strap, towing a broken-down police van full of policemen for 50km from the middle of nowhere in the desert to the town. The thermometer in the beast said 44 at one point. When we finally arrived at the town I got a bit of man love from the police chief as he hugged me and kissed my shoulders several times, then shook hands, then had photos, then swapped phone numbers, then more hugs and kisses on the shoulders.

That night we found a place to camp behind a large sand / rock dune at the end of a road that might / might not be being built. While we were here we paid homage to our Portuguese friends in the UK and had a wartmelshpiepspietcompteesh (watermelon pip spitting competition) which Jules won. Speaking of which, watermelon is a rubbish fruit. It is too big, there are too many pips, juice leaks all over you and you get sticky. You wrongly remember that it was really tasty and refreshing the last time you had it and are sorely disappointed as you gag your way through each piece. Jules on the other hand loves it, but agrees that there is too much, so although I win the argument, I still have to eat the watermelon we bought earlier.

We got a phone call from the police chief asking / telling us to come round to the police station the next morning which we dutifully did. There I got more hugs and kisses, Jules had her photo taken with him and one of his subordinates gave us his breakfast and drink, leaving himself with nothing to eat for his shift out in the desert for the rest of the day, but refusing to take no for an answer. We at least managed to get him to accept a packet of biscuits we got in Turkey (I won’t write about how we didn’t really like the biscuits because they have a funny taste and are so dry you need a cup of water to help you swallow them because then we would sound like arseholes). They were on the brink of escorting us all the way to Luxor when I managed to get out of this by telling them we needed to get some diesel before we could go. They then all push-started their now working(ish) police van and we had a police escort to take us from one service station to the next until we found our diesel, using his siren every now and then so that we could jump the red lights. That might sound grand, but jumping red lights isn’t such a big thing in Egypt – you get hooted at if you don’t.

17 thoughts on “Police in the desert”